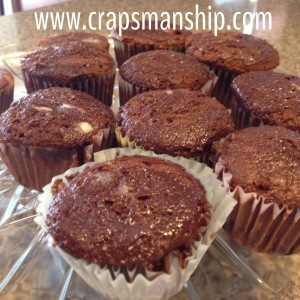 Look good, don’t they?  I needed a quick dessert the other night.  Because of the horrendous weather occurring outside at the moment, I was reluctant to head to the grocery store.  So I made do with ingredients I already had on hand.  Cream cheese, chocolate chips, eggs, and cake mix to the rescue!

I vaguely recalled a recipe for a cream cheese mixture to add to the center of chocolate cupcakes before they baked. The idea was that the chocolate cake would surround a few decadent bites of cream cheese and chocolate chips.  SEMI-CRAP ALERT:  I had a few design flaws!

I first mixed eight ounces of softened cream cheese with 1/3 cup sugar, a pinch of salt, and one large egg.  I then added one cup of milk chocolate chips.  This is what it looked like: 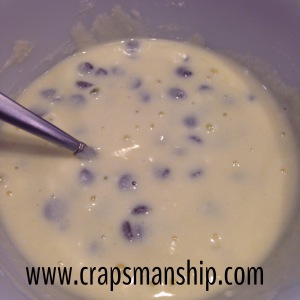 Separately, I followed the package directions from a milk chocolate cake mix.  I then poured the cake mix into 24 cupcake forms.  In each, I added a plop of the cream cheese mixture.  I put them in a 350 degree oven for all the lusciousness to bake. 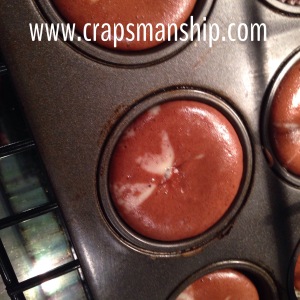 So far, so good.  When they were finished and cooled, by five-year-old granddaughter tried one.  She discovered the first design flaw.  The cream cheese mixture sunk to the bottom of the cupcake and stuck to the cupcake paper.  Meghan solved that by eating the paper, but that didn’t seem the best solution!  Next time, I’ll either use miniature chocolate chips or chop the larger ones into smaller pieces.  Maybe they won’t sink to the bottom if they’re smaller???

I tried a cupcake a little later and had the same problem.  I think a devil’s food cake mix would have imparted a deeper chocolate flavor, but it was still a tasty treat.

That night, I put all the cupcakes into a zip-lock bag, and by the next morning, the first design flaw had corrected itself.  No more sticking to the paper! 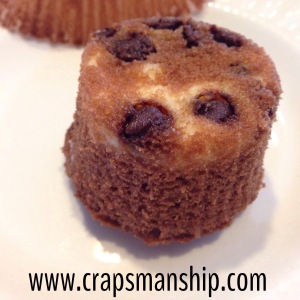 But I also discovered the second design flaw.  The cupcakes were sticky, ooey gooey, and messy.  Fortunately, no one in my family minds sticky fingers, so we’ll enjoy the rest of the chocolate treats, complete with a napkin (or two!) nearby. 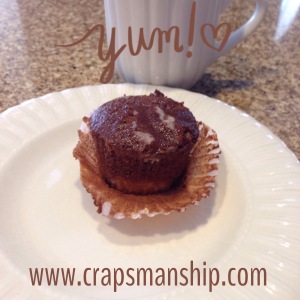