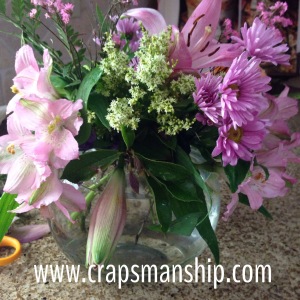 I love having fresh flowers around my house, but I never could get the arrangement just right.  I also didn’t feel as if I could spend the money on restocking each week.  I think now, I’ve got both those problems solved!

Once a month, a group of retired teachers from my former school meet for lunch, camaraderie, and catching up (aka gossip!).  After a lovely lunch in February, one of our group members (Sue) and a friend of hers (Diane) taught us some flower arranging tips.  Diane is a florist, and she brought all the supplies we needed:  a small bowl, scissors, and an assortment of flowers.  I learned a few things I’ve always done wrong, and maybe you have too.  I’ll share with you the trade secrets if you promise to only pass them on to people who will use them wisely!

CRAP ALERT:  I always have added flowers first and the greenery last.  I was doing it exactly wrong.  Diane taught us that the first step is to build an armature — a structure of greenery that serves as a foundation to stick your flowers through.  During our lesson, we used several sprigs of fern.  In the picture below on the right, I used three sprigs of greenery from my garden.  The most important feature here is to have one sprig that has a Y-shape in its stem.  You “thread” the other sprigs through the Y so that the sprigs essentially stick together.  CRAP ALERT:  I haven’t had much success with the “stick together” part, but I’m able to cross the stems through the Y and place them in the bowl.  You want the greenery to lay across the bowl, stems in the water, and the leaves flowing over the edges (picture on the right).

CRAP ALERT: When trimming flowers to fit in my vase, I have always estimated how much I needed to cut off.  As often as not, I either cut too little or too much.  Here’s an easy trick to solve that problem.  Instead of estimating, place your vase on the edge of a countertop. Hold the flower against the edge of the countertop, as seen in the picture below, and cut where the stem meets the bottom of the vase.  You’ll get it right every time!  (Ignore the old hand in the photo!)

Insert filler flowers throughout the bouquet until you’re happy with the look.

I created the bouquet from a $10 flower assortment I got at Walmart.  After a week of enjoying the bouquet, I disassembled it and made another smaller bouquet with the flowers that still looked good.  Ten dollars for two weeks worth of fresh flowers?  I can afford that!