Last January 18th, I first blogged about the mudroom I was designing for my son’s and daughter-in-law’s new house.  I envisioned a place for them to hang their coats, drop their keys, and store grandkids’ backpacks.  The builder expected the house would be done in February … then in April … then in June … but for months he did nothing.  Once the kids and the bank figured out the builder was unscrupulous, we all turned to Plan B.  The kids became their own contractor and are now within a week or two of moving in.  Houses shouldn’t take over a year to build!  (The builder’s name is Harold Something in Marshall, Texas.  I plan an active smear campaign once the house is actually completed!) 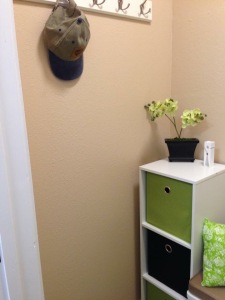 Last Wednesday, Dan the Man and I were finally able to install the furniture and design elements in the little area off the laundry room.  There’s a place for sitting to take your shoes off, a mirror to check your hair before departing the house, plenty of hooks for coats and backpacks, a bowl for keys or change, and several accessories that make the room cute and inviting.  The pictures don’t do it justice, but the kids say they like the room, and I’m happy to have this project behind me. Now onward to the move-in day!